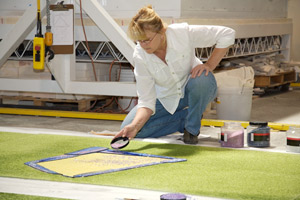 Dorothy Lenehan founded Lenehan Architectural Glass in 1995 after a years-long tenure with Narcissus Quagliata’s acclaimed glass studio in Oakland, including 10 years as studio manager.  While with Quagliata, Lenehan executed several major internationally acclaimed architectural works and served as technical advisor for large glass installations in galleries around the world including the  Franz Mayer Museum, Mexico City, the Museo Italo-Americano, San Francisco, the Oakland Museum, Oakland, California, the Corning Museum of Glass, Corning, New York, the Glasmalerei Museum Izukogen, Shizuoka-Ken, Japan, the Galleria Ca D'Oro, Rome, Italy and the Centro Nacional de Vitreo, La Granja, Spain. As technical advisor she is responsible for all aspects of gallery installation project management including, budget, transportation of artwork, hiring contractors and removal at the end of the exhibition.

After the Quagliata Studio relocated to Mexico City in 1995, Dorothy moved her studio to Emeryville and changed the focus of her work from leaded art glasswork to contemporary fused, painted and laminated architectural elements. The move to the Oakland studio in 2000 allowed for another expansion in work with the purchase of the equipment necessary to fabricate larger projects.

Because of her expertise in the field of glass design and fabrication Dorothy has had the opportunity to work with several fine artists in the Bay Area to create Public Art Commissions as well as pieces for private homes. She has the knowledge and experience necessary to work closely with architects, engineers, clients, The Art Commission, and City Planning to assure compliance with code issues as well as meeting the needs of the client and the aesthetics of the site.

Over the years, Lenehan has become an innovator in glass manipulation, devising creative fusing and painting techniques that distinguish her work.  She has designed and installed several pieces for major corporate clients, including Macy’s Union Square, Pacific Bell, Charles Schwab, HP Pavilion, Affymetrix and Soma Grand on Mission Street in San Francisco.